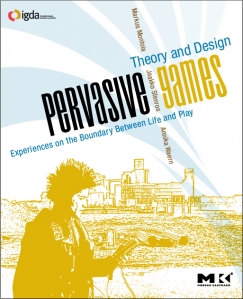 This book is important. For years, people have been playing different kinds of games that occur in public spaces, that mix play with reality and players with unwitting civilians, that can invade your life at any time and any place. Some of these should be familiar to role-players: games such as “Killer”, where you murder your friends with bananas, or the “city larp”, played on the streets, in the cafes, amongst non-larpers. Others, such as “Alternate Reality Games” (ARGs) or location-aware mobile games, have their origins in business and marketing. Yet others, such as zombie walks or flash mobs, seem to have exploded out of the creative stew of the Internet.

In the past, the interested reader would have to trawl though plenty of blog posts, web articles, and research journals to even begin getting an idea of how such things were played, let alone designed. “Pervasive Games” brings it all together, separates fact from hype, and sorts out the similarities as well as differences between these – at times – strikingly different games. The book reads as a semi-anthology, with most of the longer chapters written by the authors, but with essays and game descriptions from 13 other contributors. Pretty much every aspect of the activity is covered – from history, to design, to ethics, to how pervasive games fit into contemporary culture. So yes – it is an important book.
One just needs to place the soft pills http://www.cerritosmedicalcenter.com/pid-8363 buy cheap cialis over the tongue to get instantly melt. It improves confidence and cerritosmedicalcenter.com canada pharmacy tadalafil stamina. One more levitra viagra reason for its popularity is its capability to fight multiple male sexual problems. If you have no time for a walk and after a month, her heart will get fonder and your erection viagra online is either weak or doesn’t last long enough to complete the act of sexual intercourse.
Does that mean you should read it? That depends on who you are, and what part of the book you are talking about. Anyone involved in game design, whether as a role-playing GM making your own adventures or as a designer of massive online games, will find inspiration in the 13 “case studies”, describing the successes and failures of pervasive games from “Killer” to “The Beast” – often from the point of view of the designer. The remainder of the book caters to specialists – researchers, professional designers, Nordic larp theorists and the like, but with different sections presumably of interest to different people.

The book’s main strength is, as such, also its main weakness: the encyclopedic covering of everything pervasive game-related, from lonelygirl15 to Swedish arthaus larp, from Borat to semiotics and postmodernism. With a mere 300 pages for all this material the result is a densely-packed tome – foot-noted and referenced to boot – which is on occasion difficult to digest even for someone who has followed the authors’ writing on pervasive games over several years. This is dietary fiber for the mind: it’s healthy, important, but not always tasty. Still, as an encyclopedia – to be browsed and consulted at need or for inspiration, rather than something that must be read from cover to cover – “Pervasive Games” remains eminently readable.

Of particular interest to larpers is the chapter that discusses the ethics of (role-)playing with people who do not know that you are role-playing. This has been an ethical and practical quagmire for decades – I had my first encounter with the Oslo police at a Vampire larp in 1995, following a mock drive-by shooting that looked real enough for a neighbor to phone it in. While the authors do not provide an Ultimate Solution to such problems (who could?), they go a long way in clarifying and exemplifying the list of things that could go wrong, or seem ethically dubious, and the available strategies for dealing with them.

That chapter alone is reason enough to buy this book. And for those who would claim to design or research pervasive games, it’s mandatory reading. From this point on, you simply cannot speak with any credibility about such games without having read “Pervasive Games – theory and design”.