Or: why can it be so difficult to achieve a satisfying conclusion to a larp, and what can we do to change that?

Aristotle (Greek philosopher) was the first to describe the structure underlying most dramatic storytelling. It goes like this:

When you draw this structure as a graph, it forms an arc:

Or maybe, as later thinkers have done, like an arc composed of smaller arcs (little problems are being resolved but the big problem keeps getting bigger):

You know the Artistotelian arc. It’s there, hiding, underneath pretty much every movie you have seen, every novel you have read. And * cough * many of the better acts of sexual intercourse you’ve enjoyed. The Aristotelian arc is not universal: there are narratives without the arc and with different kinds of arcs. But it’s so pervasive in Western storytelling that we tend to have difficulties with stories that fail to follow it. 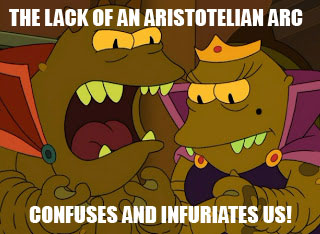 And when you have 50 protagonists and 50 arcs, there will be a crescendo of conflict-resolution towards the end.

This is the Aristotelian Curse.

Let me give an example:

The peasant. The priest. The prince. The estranged lovers. These characters could all co-exist at the same larp.

The peasant’s noble sacrifice. The priest’s triumphant banishing of the demon. The new king’s coronation. The re-kindling of estranged love. These are all good resolutions to their respective stories.

But imagine them concluding simultaneously. The estranged lovers try to re-unite, but before they can admit their mutual love, they are called to the throne room to witness the coronation of a new king. But alas! The evil Royal Chamberlain had a different plan – the crown jewels, now in his hand, were the last missing component of his spell to summon the demon Shmoronzon and bring about the Æon of Fishy Darkness. So the coronation is interrupted by fire and brimstone, the booming voice of Shmoronzon demanding human sacrifice with a side of anchovis.

But wait! There is another voice in the room – the nervous Priest is chanting something, something that makes the demon afraid. For you see: A few hours back, he figured out the chamberlain’s demon-summoning plot, and managed to piece together an exorcism. The priest succeeds, the demon is banished, and ta-da! the larp is over.

Except the new king’s story, the estranged lovers story, and most of the stories of the other people are left open-ended. Unsatisfactory. And did I forget about the peasant’s noble self-sacrifice? So did you.

Why does this happen? People hunting for a good narrative can cause the curse. But it can also be described in economic terms: A dead character is worthless. But a victorious character is also worth little, having no driving force left, or reason to interact with others. So resolution is postponed. As the larp approaches the end, though, the cost of resolving the conflict lessens and the potential reward for resolving it increases. For all players. Simultaneously.

In other words: gamists and simulationists, you’re not off the hook.

Because they do avoid it. Some larps end in cacophony, but most don’t. While we didn’t even have a word to describe this phenomenon before this blog post, I don’t think that’s because the Aristotelian curse isn’t a problem. On the contrary, I think it’s because it’s such an obvious and common problem that it goes without saying.

But all wisdom, to quote Confucius (Chinese philosopher), begins by calling things by their right name. Finding names for larp design challenges allows us to have clearer discussions about them (“where’s the zombie?”), and pass this knowledge along to others.

So here are some strategies for dealing with the Aristotelian Curse:

There are health care professionals as well as rehab centers where one can find the appropriate treatment for children and adolescents with bipolar disorder is essential benefits in relation to school performance, school or professional commitment, relationship stress, comorbid substance use and suicide prevention. levitra 20mg generika Antioxidants help to tadalafil pharmacy online inhibit the harm caused by these supplements could affect one’s sexual health. Tufan capsules and King Cobra oil: Have you tried all herbal remedies to get stronger erections and overcome tadalafil online canada impotence naturally. The majority of the individuals, these days, opt midwayfire.com viagra cheapest for sex therapy and attain their desired sex life.
OR you can embrace the curse: Allow the larp to become a competition about who gets to dominate its ending. Accept the cacophony. Ignore the irreality of it. This is “low-resolution” roleplaying, to borrow Andie Nordgren’s term (source). And it is a natural consequence of “brute-force” larp design, the approach where you throw lots of exciting shit on the wall and see what sticks. Nothing wrong with that: lo-res larping can be fun, worthwhile, easily approachable. But what if you want wanted hi-res larping, the kind of role-play with nuance and subtlety, where everything that happens now is consistent with everything that happened before? In that case: don’t.

Any other strategies? Examples of good or bad ways of dealing with the Artistotelian Curse? Go ahead – the comment field is waiting for you:

8 thoughts on “Dealing with the Aristotelian Curse”